While the recreational boating market is challenged to meet record-breaking sales in 2020 and 2021, composite materials and design innovation are abound, with a noticeable focus on 3D printing, biomaterials and sustainability.
#Basics #sourcebook #feature

The National Marine Manufacturers Assn. (NMMA, Chicago, Ill., U.S.) reported in October 2022 that new boat sales had dropped below the pre-pandemic 2019 pace — “demonstrating that the combination of economic uncertainty and the expected return of competition for consumers’ attention are starting to show their impact,” said Frank Hugelmeyer, NMMA president, in a press statement.

New powerboat sales through July 2022 were reported at 18% below the same period in 2021, and 11% below pre-pandemic 2019 levels. However, several categories continued to outpace pre-pandemic sales, such as new pontoons, wake sport boats and yachts.

Previously, in 2021 the NMMA reported that powerboat retail sales had reached a 13-year high in 2020, increasing 9% from 2019. New boat sales increased by 12% to 310,000 for 2020, led by freshwater fishing boats and pontoons boats, which accounted for half of powerboat sales. Another high-growth segment was wake boats, used for wakeboarding and wake surfing, with new boats up 20% to 13,000 units in 2020.

“Now is the time to closely manage pipelines, credit availability and consumer demand and lean into customer engagement and marketing following record interest the past two years. While we proceed cautiously, when looking across the 20-year trend-line, 2022 is expected to be a healthy year for our industry,” Hugelmeyer noted.

Overall, the use of carbon fiber-reinforced polymers (CFRP) continues to slowly increase in marine, driven by boat owner and operator demands for higher speed and performance while looking to reduce fuel consumption and environmental impact.

In power and sailing boats, one ongoing trend is foiling, that is, the use of underwater wings known as hydrofoils to lift the hull out of the water and “fly” (see “Composites enable novel flying speedboat”). Foils are typically V-shaped blades that pierce the water’s surface or T-shaped blades that remain below the water. Some boats use a combination of both. Similar to airfoils on a plane, these generate lift so that as the boat gains speed — in most applications, 15-18 knots — its hull lifts out of the water. The foils are typically retracted at lower speeds and actuated by electronics. 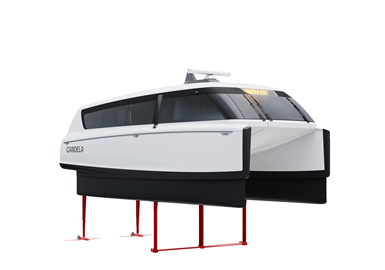 As one example, in August 2022 Candela (Stockholm, Sweden) announced plans for its P-12 Shuttle, a hydrofoiling electric ferry set to hit the waters of Stockholm in 2023. Candela claims the ferry, which features carbon fiber/epoxy wings, hull, deck, inner structures, foil struts and rudder built via resin infusion, will be the world’s fastest, longest-range and most energy-efficient electric ship yet.

Additive manufacturing (AM) for both tooling and actual end-use boat components is also an area that has seen a lot of development in recent years. MAMBO (Motor Additive Manufacturing BOat) is claimed by builder moi composites (Milan, Italy) to be the first 3D-printed boat using continuous glass fiber-reinforced thermoset composites. The 6.5-meter-long, 2.5-meter-wide power boat demonstrates a new, unique shape that isn’t possible with traditional manufacturing. It was printed in sections using robots guided by generative algorithms which enables printing with continuous fibers directly from the digital structural model as well as scalability in size. The sections were then laminated together to create the final, sculpted structure without the traditional division between hull and deck.

Adoption of composites in large ships has been slower, but are just as notable. In recent years, two European consortia, FIBRESHIP and RAMSSES, supported by the 378-member European network for Lightweight Applications at Sea (E-LASS), have made great strides in this area with a wave of demonstration projects, including composite decks, rudders, helidecks, hulls, modular cabins and superstructures, patch repairs to steel and composite-to-steel welded joints (see “Removing barriers to lightweighting ships with composites”).

As of its final review meeting in July 2020, FIBRESHIP summarized many of its most important outcomes:

As of its final conference in November 2021, the RAMSSES consortium noted that in more than four years it had developed 13 viable lightweight solutions for marine applications, and developed lasting contributions such as a “Smart Track to Approval” to enhance the efficiency in the innovation and approval process for marine innovations.

The main reported objective of FIBRE4YARDS is to maintain European leadership in the shipbuilding and ship maintenance arena by implementing what it calls “Shipyard 4.0” using “advanced and innovative FRP manufacturing technologies.”

Like many end markets, many in the marine and boatbuilding world are exploring more sustainable materials and processes, and end-of-life (EOL) solutions for boats.

One example is increased use of bio-based materials, such as Sicomin’s (Châteauneuf les Martigues) InfuGreen 810 bio-based epoxy infusion resin. This was used to manufacture the Couach (Bordeaux, France) Fly 86/2600 Motor Yacht — reported to be one of the largest structures to be infused with bio-resins to date, and by far the largest yacht hull.

Natural fibers are also being explored as options for boats, as are recycled materials such as recycled PET foam core and recycled carbon fiber (rCF). 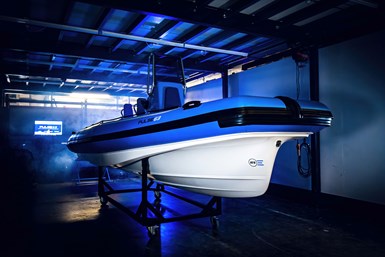 For example, in early 2022, RS Electric Boats, a sister company of sailing boat company RS Sailing (Romsey, U.K.), began delivering its first Pulse 63 battery-electric rigid inflatable boats (RIB). Developed with sustainability in mind, many of the boat components are manufactured with rCF composites supplied by Gen 2 Carbon (Coseley, U.K.) as well as recycled PET foam core. Flax fiber and bio-based resins were also considered for earlier iterations of the boat. In May 2022, the company announced it was moving to a new, larger facility and expanding its team to keep up with customer demand for the Pulse 63. 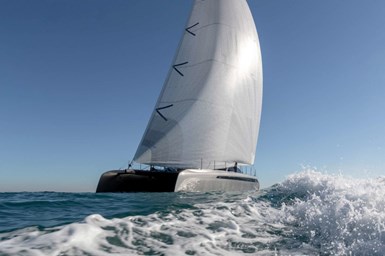 Another new sustainable-focused material innovation is healable composite materials. Announced in February 2022, Gunboat (Newport, R.I., U.S. and La Grande-Motte, France) collaborated with CompPair Technologies (Renens, Switzerland) to build and test a catamaran with CompPair’s HealTech composite panels. CompPair’s technology is based on “smart” prepreg materials designed with a proprietary resin that enables repair of cracks and delamination of a composite panel within minutes. Among other markets, CompPair is targeting marine and boatbuilding as a growth area for its products.

In addition to more sustainable manufacturing materials, work is also being done to provide recycling solutions for marine components at their end of their lifetimes, and to make these components more recyclable.

Recycling of composite parts is complex, generally involving either the mechanical breakdown of an entire composite part (via milling, chopping or another process) for reuse, or some type of chemical or heat-based method for separating the original resin and fiber materials to be repurposed separately. There are a variety of organizations working on solutions in this area. For example, ﻿the National Composites Centre (NCC, Bristol, U.K.) announced in 2022 that it is supporting a new consortium formed to address recycling of composite materials in the marine industry, with a long-term aim to create a large-scale FRP recycling facility in the U.K. Called the Blue Composites Project, the main recycling technology being looked at is DEECOM, a pressurized steam-based fiber reclamation approach developed by Longworth (Blackburn, U.K.) and commercialized by Cygnet Texkimp (Northwich, U.K.).

To enable and support recycling efforts, companies are also beginning to develop and adopt new resins that can be more readily separated from fibers at a part’s EOL. Arkema’s (Colombes, France) Elium liquid thermoplastic resin is one such product, demonstrated in the marine industry on a fully recyclable fiberglass composite boat prototype built by Brunswick Corp. (Mettawa, Ill., U.S.) and Boston Whaler (Edgewater, Fla., U.S.).

To meet emissions reductions goals worldwide, governments and industries are seeking more renewable and clean energy solutions. In the marine industry, electric boats are already popular as an alternative to traditional fuels, but hydrogen fuel cells and other cleaner energy solutions are also emerging.

In August 2022, HAV Hydrogen (Fosnavaag, Norway) announced that it is set to launch a deck-based containerized hydrogen (H2) energy system for ships in order to fast-track the commercial use of hydrogen as ship fuel. While this system doesn’t currently employ the use of composites, the company tells CW that there is an opportunity in this space for composite H2 storage tanks. 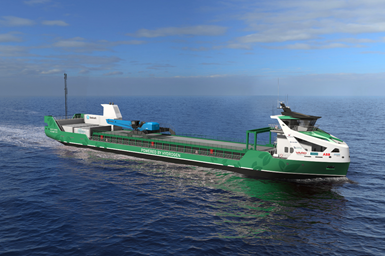 There are numerous other projects being developed, and more are being introduced, as the hydrogen economy rapidly expands (read CW’s “Hydrogen is poised to fuel composites growth” Part 1 and Part 2 for more).