Growth and potential grow for wider composites adoption in bridges, rebar and other concrete reinforcement and other infrastructure applications and repair.
#Basics #regulation #frprebar

The benefits of composites to increase strength, durability and lifespan for infrastructure applications are increasingly used for new builds as well as repair projects, such as the pictured SUREbridge repair project in Hardenberg, Netherlands. Composite decking was added to an existing concrete structure to add structural integrity while saving the time and costs associated with complete replacement. Photo Credit: FiberCore Europe, InfraCore

However, adoption of fiber-reinforced polymer (FRP) composites in place of traditional materials like concrete or metal has historically been slow, due to factors such as lack of composite materials knowledge and education, lack of FRP-specific standards and building codes and higher up-front materials costs (see “Why aren’t composites synonmous with infrastructure?” for more on this topic).

Where does the industry stand now? On Dec. 1, 2022, CW hosted a virtual event titled CW Tech Days: Composites in Infrastructure and Construction, where a lineup of experts shared the latest materials, design, engineering and analysis information in the field. If you missed the live event, you can still register to watch the event recording.

At CW Tech Days, Dr. Robert Walker, analyst at Future Materials Group (FMG, Cambridge, U.K.), explained that the building and construction market needs to change, due to pressing challenges like climate change, workforce development gaps, aging infrastructure and more. Changes, he said, will come through enabling technologies like higher adoption of advanced materials, new construction methods such as increased use of additive manufacturing (AM) or autonomous construction and digital tools. “None of these solutions are new, but adoption has been slow,” he said.

Walker described the current phase of adoption for composites in building and construction as “rational switching,” meaning that enough successful case studies have been demonstrated that informed decision makers are now beginning to adopt composites more readily. (See CW’s “The growing of composites in infrastructure” for additional information).

Adoption can be accelerated further, he noted, through efforts by the composites industry. These could include creating modular or off-the-shelf products to gain easily repeatable business, fuller supply chain integration and target powerful decision makers such as those in charge of regulations and standards governing materials use in infrastructure.

Two long-standing barriers to wider adoption of composites are the need for more funding, and updated building codes and standards to help validate and inform the use of composites in infrastructure applications.

Industry funding efforts are also going toward creation of specific building codes, standards and manuals for the use of FRP materials in rebar and other applications. For example, in the U.S., NEx: A Center of Excellence for Nonmetallic Building Materials was launched in 2021 by the American Concrete Institute (Farmington Hills, Mich., U.S.) and Aramco Americas (Houston, Texas, U.S.), with the goals of promoting and providing standards for the use of nonmetallic materials like composites in infrastructure and construction applications.

This work includes the development of updated building codes and manuals specific to the use of FRP in rebar and other infrastructure applications, as well as funding for R&D initiatives, educational programming and more. 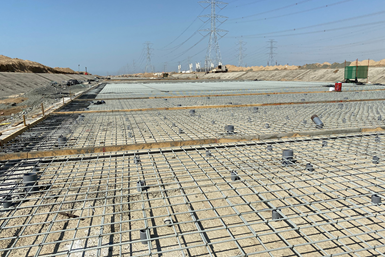 GFRP rebar as an alternative to steel for reinforcing concrete in roads, bridges and other structures has been an available option for decades. Benefits include corrosion resistance, longer product lifespan and light weight, which can enable easier transport and installation.

One challenge to wider adoption of GFRP is that it is not a direct replacement for steel, necessitating design changes to accommodate differences in mechanical properties like higher tensile strength but lower tensile modulus, different coefficients of thermal expansion (CTE) and the fact that GFRP rebar is less amenable to welding and bending on the job site than steel is.

However, the benefits of GFRP have been shown to outweigh the challenges in a number of cases — and increasingly large ones. For example, in 2021 CW reported on the manufacture of 11,000 kilomters of GFRP rebar by Mateenbar (Dubai, UAE and Concord, NC, U.S.) to reinforce a 23-kilometer-long, 80-meter-wide concrete flood mitigation channel in Saudi Arabia. In the U.S., the Florida Department of Transportation (FDOT) and others are leading the way toward wider adoption of GFRP rebar.

Beyond GFRP, more recently, basalt fiber rebar is also being explored and used as another alternative, and carbon fiber-reinforced polymer (CFRP) has also been used.

Along with rebar for reinforcing concrete bridges, composites can also be used for girders, decks and other bridge structures; trench covers; sea retaining walls; and more. 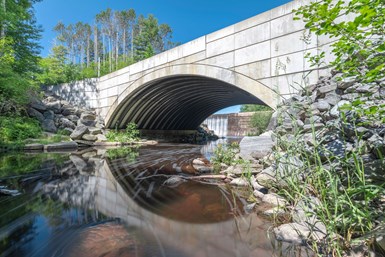 AIT Bridges’ arch bridge system uses a braided fiber-reinforced polymer (FRP) tube filled with concrete. It can be applied to various bridge structures and can span up to 80 feet. Photo Credit: AIT Bridges

During CW Tech Day, AIT Bridges’ president and chief engineer Ken Sweeney presented a recent example of the company’s G-BEAM tub girder system used to replace several spans in the middle of the aging Sun Island Bridge in South Pasadena, Fla., U.S. Built originally in 1970, several of the corroded carbon steel beams were repaired in 2008, then replaced with non-corrosive, cost-competitive composite beams in 2019. 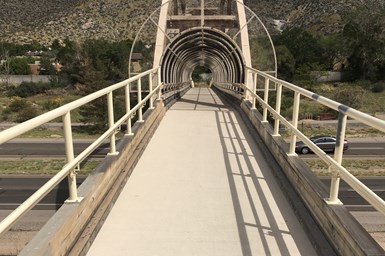 One way fabricators and materials developers are increasing the competitiveness of composites in infrastructure is by creating structures and products that can withstand extreme weather events, fires and extreme temperatures better than traditional materials. For example, aiming to combat climate change and increasingly strong weather events, in 2022 CCG also launched its new StormStrong upgrade option, which incorporates proprietary technology to pultruded poles, piles and similar applications. 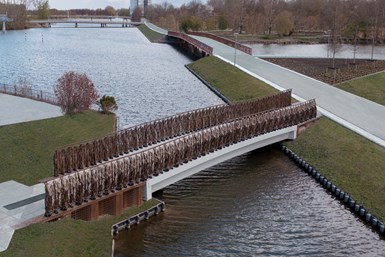 A consortium of European researchers are developing and installing a series of “smart” bridges that integrate sensors into natural fiber/bio-resin composites, aiming for both sustainability and Industry 4.0. Photo Credit: Smart Circular Bridge

Other innovations target sustainability, such as a project in Europe, led by Eindhoven University of Technology (TU/e, Netherlands), to produce a “Smart Circular Bridge” that both incorporates natural fiber composites and bio-resins and integrated sensor technology for structural health monitoring (SHM) of the finished pedestrian bridge. The first of three planned bridges for this project was installed in April 2022. Also aiming at sustainability, several organizations like the Re-Wind Network have demonstrated that decommissioned composite wind turbine blades can be repurposed into pedestrian bridges, such as one installed in Ireland in 2022.

Beyond bridges, composites can be used to manufacture trench covers, walkways and similar structures, such as those built by Dura Composites (Essex, U.K.). In 2022, the company announced expansion of its products into Australia and New Zealand.

In addition to adoption of composite materials for new infrastructure builds, interest in and use of composites for repair or strengthening of existing structures is also increasing.

As reported by CW, the 2021 Infrastructure Report Card – Bridges claims that 42% of the 617,000 bridges in the U.S. are more than 50 years old and 46,154 (7.5%) are considered structurally deficient. The pace of addressing the 231,000 bridges that need repair has slowed to 0.1% annually, which the 2021 bridge report warns is not sustainable. At the current rate, repair of these bridges will take more than 50 years; but the rate of deterioration is exceeding the rate of repair or replacement. In Europe, most of the roughly one million concrete bridges and viaducts in Europe are reported to be more than 50 years old, exceeding their design life.

Composites offer increased strength, durability and longer life when used to reinforce or repair many of these structures. 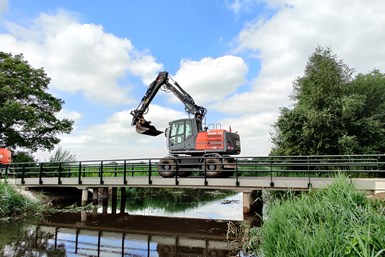 The first SUREbridge installation was completed in October 2021 on a vehicle bridge in Hardenberg, Netherlands. A FiberCore Europe composite deck was bonded onto the existing concrete deck, doubling its load-carrying capacity in just six weeks. Photo Credit: InfraCore, FiberCore Europe

One notable recent example is a project called SUREbridge (Sustainable Refurbishment of Existing Bridges), which ran from October 2015 to May 2018 with funding from the European Commission, the U.S. Dept. of Transportation and other partners via the Infravation (Infrastructure Innovation) program.

The project partners developed a solution to use InfraCore (Rotterdam, Netherlands) fiber-reinforced polymer (FRP) composite deck adhesively bonded to the top of an existing concrete bridge deck. SUREbridge test results showed that the original carrying capacity of a bridge could be more than doubled, enabling widening of the deck to accommodate a pedestrian or bicycle path.

Furthermore, a number of companies are now offering a range of modular or custom FRP repair solutions for infrastructure applications. QuakeWrap (Tucson, Ariz., U.S.) is one company that has, for more than 30 years, offered a variety of GFRP and CFRP products for repair or strengthening of piles, pipes, walls or other structures. For example, one product, PileMedic, is constructed from CFRP and GFRP laminates combined into a very thin sheet that is wrapped around and attached to an existing pile or column. The solution strengthens or repairs the existing structure, adds strength and corrosion resistance, and is fast to install.

At the recent CW Tech Days event, QuakeWrap CEO Dr. Mo Ehsani spoke about several current products and case studies that the company has worked on, including kits and fabrics for repair of bridge piles at Pearl Harbor, cell phone towers reinforced with FRP to add strength to carry additional 5G equipment, deck beam repair and more. The process for engineering, designing and installing one of these products can be seen in the video below.

Epsilon Composite (Gaillan en Médoc, France) is another company working in this field. Specializing in pultrusion and pullwinding of CFRP, among its products Epsilon offers prefabricated, pultruded plates, unique anchoring solutions, fabrics and other products that can be rapidly, adhesively joined to existing structures. As recent examples, Epsilon Composites’ products were used to renovate the Santiago Bernabéu Stadium and the Westgate Bridge in Melbourne, Australia.

Worth noting is that FRP can be used to repair structures beyond bridges and construction applications. For example, V2 Composites (Auburn, Ala., U.S.) is also targeting CFRP repair solutions for precast concrete, and in 2022, introduced its new carbon fiber T-Biscuit product, said to be a go-to solution for repair of failed connections in concrete parking structures.

Future-looking efforts include development of new standards for FRP infrastructure repair, and new R&D. In 2022, for example, ASTM International’s (Cochockton, Pa., U.S.) composites materials committee announced a proposed standard (WK74694) for use in the inspections of FRP composite repairs to buildings and other civil structures. The proposed specification will be an inspection standard providing uniformity of the entire process and procedures for different applications, as well as consistency with the inspection process. The proposed standard will be used by specification writers, engineers and contractors who plan and conduct inspections of FRP composite repairs.

On the research front, one emphasis is optimizing FRP solutions for strengthening coastal infrastructure against extreme weather events. In the U.S., the National Science Foundation (NSF) and National Institute of Standards and Technology (NIST) have invested $7.6 million to support research expanding on the nation’s knowledge of community and infrastructure resilience to hurricanes, wildfires and other natural hazards.

The University of Miami’s (Fla., U.S.) College of Engineering and Rosenstiel School of Marine and Atmospheric Science, which received two of the NSF and NIST grants, is researching and testing GFRP-reinforced concrete to enhance the corrosion resistance and strength of existing seawalls and other coastal infrastructure.