Wind energy and renewables in general continue to be a large market for composites, despite supply chain challenges. Photo Credit: Getty Images

The current global energy landscape is complex and shifting — the International Energy Agency (IEA, Paris, France) has labeled the current climate a “global energy crisis,” in fact, per its World Energy Outlook 2022 — with strains and disruptions caused by factors like pandemic-related outages, sanctions and other challenges related to Russia’s invasion of Ukraine, legislation and demand for fewer carbon emissions, and more.

Despite current challenges, energy in general remains a large and growing market area for composites, as these materials have long been used for a variety of energy-related applications, including wellhead components and pipelines for offshore and onshore oil and gas drilling, wind turbine blades and more.

The wind energy market has long been the largest consumer of composite materials. Composites are also sometimes used to manufacture components for other types of renewable energy devices, such as the blades for hydroelectric and tidal turbines. Turbine blades and wind turbine nacelle covers are generally manufactured from infused glass fiber-reinforced composites, often — and increasingly, as longer wind blades are developed and built — reinforced by a carbon fiber composite spar cap.

According to the Global Wind Energy Council’s (GWEC, Brussels, Belgium) 2022 Global Wind Report, the global wind industry had its second-best year ever in 2021, second only to 2020, with almost 94 gigawatts (GW) of capacity added, bringing total reported global wind power capacity up to 837 GW.

In its U.S. Offshore Wind Quarterly Market Report for Q3 2022, the Business Network for Offshore Wind (Baltimore, Md., U.S.) reported that new federal policies, investments and state-level actions led to a 58% increase in long-term targets for offshore wind by coastal states. In particular, California announced a goal to deploy 25 GW of floating offshore wind by 2045 and New Jersey increased its target from 7.5 GW by 2035 to 11 GW by 2040.

In addition, the first U.S. commercial-scale offshore wind farm, Vineyard Wind, was approved in 2021. The 800-MW project off the coast of Massachusetts is expected to feature 62 13-MW Haliade-X turbines (developed by General Electric Co., Boston, Mass., U.S.) and go online in 2023. In January 2022, the South Fork wind project off the coast of New York was given federal approval to begin construction.

However, through 2022 the wind energy industry has also experienced challenges such as raw materials shortages and supply chain delays, as well as, in the U.S., the expiration at the end of 2021 of some of the federal renewable electricity production tax credits (PTC) that had been incentivizing renewable energy initiatives in previous years. 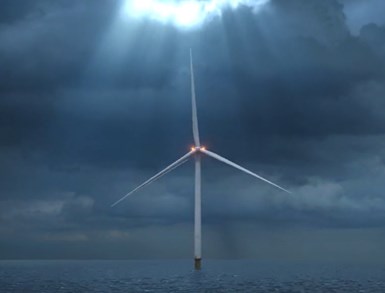 Vestas’ V236-15.0-MW offshore turbine, announced in 2021, boasts 115.5-meter blades and is said to be able to produce 80 gigawatt-hours (GWh) per year depending on conditions. Photo Credit: Vestas

The first large-scale, commercial wind farms comprised turbines rated at 1 MW or less, with glass fiber-reinforced blades that typically ranged from 10 to 15 meters long. Today, offshore turbines are generally rated 6 to 9 MW with blades 65-80 meters long — and getting longer, such as Vestas’ (Aarhus, Denmark) 15-MW, 115-meter-long blade V236-15.0 MW for offshore wind, launched in 2021. By 2035, onshore wind turbines are predicted to reach 130 meters, according to a 2022 survey of more than 140 wind energy experts conducted by the National Renewable Energy Laboratory (NREL, Golden, Colo., U.S.) in collaboration with Lawrence Berkeley National Laboratory (LBNL, Berkeley, Calif.) and the U.S. DOE. In addition to fiberglass composite blades, as wind turbines get larger and blade lengths continue to increase, carbon fiber reinforcement in spar caps — incorporated as the reinforcing member of wind turbine rotor blades — has become an efficient way to reduce overall weight and increase blade stiffness to prevent tower strikes in the event of sudden wind gusts. 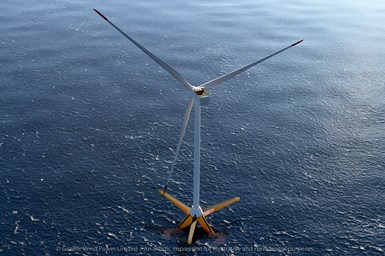 Furthermore, in offshore wind much development work has been related to floating offshore wind platforms. Floating platforms that sit on top of the water enable wind energy development farther offshore than many of the fixed foundation turbines that are being installed in shallower waters. There are many different floating platform concepts in various stages of development, many of which use composites. For example, a prototype of Gazelle Wind Power’s (Dublin, Ireland) platform, which features above-water tripodal arms tethered to the seabed below, passed several first feasibility tests in October 2022. The U.S.’ ATLANTIS (Aerodynamic Turbines Lighter and Afloat with Nautical Technologies and Integrated Servo-control) program, funded by the U.S. DOE, is a program begun in 2019 that has included 12 R&D efforts toward advancing floating offshore wind technology.

Circularity and recycling of wind blades

Over the last several years, the challenge of what to do with decommissioned wind turbine blades at their end of life (EOL) — besides stacking them up in landfills — has also been a large focus for wind energy companies.

There are many solutions in development by companies across the wind blade supply chain, as reported in CW’s 2022 feature “Moving toward next-generation wind blade recycling.” Generally, solutions involve mechanical or chemical recycling of the materials from wind blades at their EOL — or, in some cases, repurposing entire wind blades for other uses — and design efforts to make the wind blades themselves inherently more recyclable. 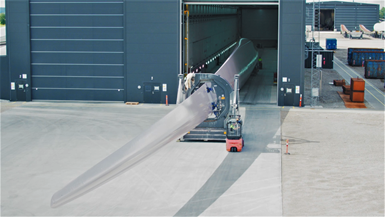 Siemens Gamesa was the first to bring its RecyclableBlade to market for offshore wind in 2021, with the first blades installed in Germany in July 2022. In 2022, the company also launched a new RecyclableBlade version for onshore wind projects. RecyclableBlades are made using epoxy with Aditya Birla’s (Mumbai, India) Recyclamine hardener, which enables the resin to be more easily separated from the fiber at the blade’s EOL.

Composites use in other renewable energy technologies 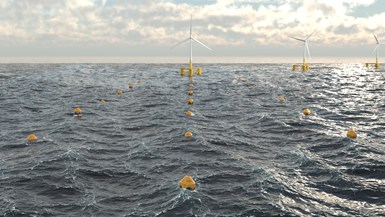 There are other renewable energy sectors employing composites as well. For example, one promising ocean energy technology is wave energy converters (WEC), devices that use the motion of ocean waves to generate electricity. In 2021, CorPower Ocean (Stockholm, Sweden) built the first full-scale prototype of its filament-wound glass fiber-reinforced composite (GFRP), buoy-shaped WEC, which the company hopes to scale up into industrial-scale ocean energy farms by 2025. As of October 2022, the company had successfully dry-tested many of the system components and was expected to install its first prototype offshore for in-water testing by November 2022. 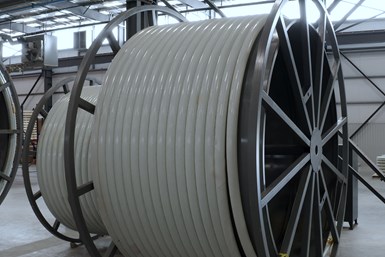 Renewable energy applications top many of today’s headlines, but fossil fuel energy such as oil and natural gas continue to lead energy production and consumption in many areas of the world. For example, according to the 2022 Annual Energy Outlook from the U.S. Energy Information Administration (EIA, Washington, D.C., U.S.), while renewable energy was the fastest-growing source of energy in the U.S. in 2022, oil and natural gas remain the most-consumed sources, projected through 2050.

For years, corrosion resistance has prompted adoption of carbon fiber or fiberglass composites as a replacement for traditional metals in a variety of oil and gas drilling applications, such as wellhead protection components, frag plugs for use in onshore hydraulic fracturing (fracking) applications and more.

For offshore oil and gas pipelines, in recent years, companies such as Strohm (formerly Airborne Oil & Gas, Ijmuiden, Netherlands) and Magma Global Ltd. (Portsmouth, U.K.) have led the way toward development and qualification of thermoplastic composite pipe (TCP) to replace metal in offshore pipelines. Several successful qualification and pilot programs have been announced around the world. Beyond oil and gas, more recently companies such as Strohm claim that TCP can be a key component to companies’ energy transition, with applications in transporting green hydrogen.

In addition, composite solutions can also serve as efficient, corrosion-resistant solutions for repair of existing pipelines — similarly to how composites are used as a repair or strengthening solution for utility and civil infrastructure applications.

For example, QuakeWrap (Tucson, Ariz., U.S.) is a company that has, for more than 30 years, offered a variety of GFRP and CFRP products for repair or strengthening of piles, pipes, walls or other structures. At CompositesWorld’s December 2022 virtual event CW Tech Days: Composites in Infrastructure and Construction (register to watch a recording of the event here), Mo Ehsani, president of QuakeWrap, introduced as part of his presentation the company’s solution for trenchless  repair of oil and gas pipelines. QuakeWrap has developed a technique for wrapping its carbon or glass fiber fabric materials around a balloon-like device that is then launched into the pipeline, applied and cured remotely, without the need to dig up the pipe or otherwise disrupt the area.

For more, see CW’s past reporting on the oil/gas market, renewable energy market and pressure vessels.