What kind of pickup would Bruce Wayne drive?

Introducing the Brabus 800 Adventure XLP Superblack, a retrofitted Mercedes-AMG G 63 pickup truck that is off-road capable and decked out in carbon fiber.
#specialreport

The Brabus 800 Adventure XLP Superblack started out as a Mercedes-AMG G 63, a sport ute, before being transformed into an off-road-capable pickup truck. Photo Credit, all images: Brabus GmbH

Brabus GmbH (Bottrop, Germany) was established in 1977 to do one thing, which it has honed over its years of existence: Taking Mercedes-Benz vehicles (also encompassing Maybach and smart) and turning them into machines that are more functional, exotic and performance-oriented than they were before they rolled into the shop in Bottrop, Germany. And it should come as no surprise that composites play a role in its vehicle tuning. 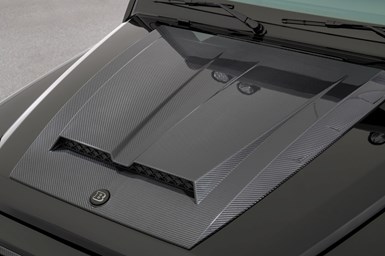 As an 800-horsepower performance truck, the vehicle has exposed performance material in strategic locations, such as the hood. It is worth noting that carbon fiber is also used for the bedliner.

The latest vehicle is the Brabus 800 Adventure XLP Superblack, which is based on the Mercedes-AMG G 63. It is a pickup truck that is built for off-road performance, given that it has a custom-designed suspension that offers ground clearance of 19.2 inches and portal axles for the all-wheel drive (AWD) system.

Under the hood — a composite structure that, like the other carbon fiber elements produced for the vehicle by Brabus’ CSP division, uses a material named “Flexiteek,” which is used in the construction of high-performance boats by Brabus Marine — is an 800-horsepower, twin-turbo V8 that produces 737 pound-feet of torque.

Among the places where carbon fiber parts are fitted to the truck exterior are:

The color scheme on the interior is black-dominant. Note the carbon fiber trim on the door panel.

The interior of the vehicle comprises leather, alcantara (a synthetic textile) and also carbon fiber — all in black. The carbon fiber interior trim pieces are found on the steering wheel, center console and door panels. (There is an extensive use of aluminum on the interior, too, but it is finished with a “Shadow Chrome” coating so as to minimize the shine.)